Home  »  Uncategorized   »   The Seed and the Story: ARVAC and VISTA, Folk Arts and the War on Poverty in Arkansas.
April 11.2012.
Comments
Boiled Down Juice 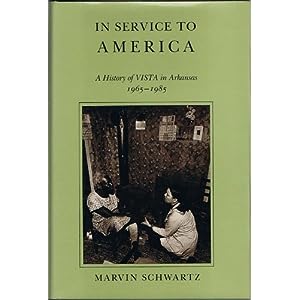 Click on the photo to connect to ordering info via Amazon.

The Seed and the Story is a weekly column exploring folklife, sustainability, oral history, human rights,and community in Yell County, Arkansas.   The column is published in the Post Dispatch and is syndicated in the Courier.  Please remember to support your local paper and independent media!  The Seed and the Story column is just of many features you can find on the Boiled Down Juice.  Follow us on Facebook and Twitter.  If you enjoy our posts, please tell a friend. And thanks for reading.

Alongside researching the history of Chickalah and Harkey’s Valley, I’ve been reading In Service to America: A History of Vista in Arkansas 1965-1985.  Written by Marvin Schwartz, this 1988 publication traces the VISTA organization throughout the state.   I’ve been particularly interested in the work of this organization in central Arkansas, including the creation of a craft co-op, which served both Yell and Pope Counties.

Created in 1965, VISTA was an outgrowth of President Johnson’s War on Poverty and Economic Opportunity Act of 1964.  This national legislation sought to provide lasting and locally based solutions to struggling communities.  Operating much like a domestic version of the Peace Corp, volunteers in the VISTA program received a subsistence wage and lived in economically poor areas where they worked in partnership with community members to generate economic initiatives and help residents gain access to health care and adequate food.  VISTA volunteers, many of them college age, worked to help create grassroots programs which focused on local needs, thus making each VISTA program unique to its region.

In 1960 approximately 40% of the population in the river valley was living below the poverty line.  Illiteracy, inadequate housing, and unemployment were rampant.  One of the first VISTA programs in the nation was the Yell County Economic Opportunity Program, a pilot recipient of an OEA grant.  The organization was soon absorbed into its larger sister organization, ARVAC (Arkansas River Valley Area Council), which hosted numerous national and local volunteers.   ARVAC formed programs such as the Housing Development Corporation, an organization utilizing the rural tradition of barn raising to help low income families secure homes, and ARVAC Rural Folkcrafts, a network which provided a market for rural quilters, white oak basket makers, seamstresses, and other artisans, allowing them to sell their traditional wares and earn a living for their families. Another organization, Counseling Associates (formerly known as ARVAC Community Mental Health Program), began under the ARVAC VISTA program and operates independently today.

In its early days VISTA brought in volunteers from around the nation, but in later years became more focused on long-term, locally based volunteers, which helped the programs thrive.   From the beginning, the goal of VISTA programs was to become self-sufficient. ARVAC stuck around and quickly became a model of successful VISTA organizing.   ARVAC’s craft co-op, which began in 1975, continued throughout the 1980s, as did housing initiative, which later became known as Universal, INC.

Schwartz’s book features interviews with a few river valley VISTA workers, including the late Myrtle Cress who worked in Ola and Betty Burnett who organized a housing co-op in Dardanelle.  It also highlights the work of Lou Vitale who was instrumental in founding the crafts co-op. I’d love to learn more about the creation of these initiatives, how people felt about the work, the craftspeople who sold at the co-op, and the use of the barn raising tradition in area housing initiatives.   Were you affiliated with VISTA?  Did you or someone in your family sell crafts at the co-op?  Perhaps your house was built utilizing the barn raising tradition?  I’d love to hear more.   An extra special thanks to Mike Luster of the Arkansas Folklife Program for introducing me to this book.

Also please don’t forget we’re still working on compiling stories of plants and seeds for our book on stories and gardening in the area.  We’d love to include your story!  To learn more visit us here.  To read a little bit about the backstory of the garden book read this column.